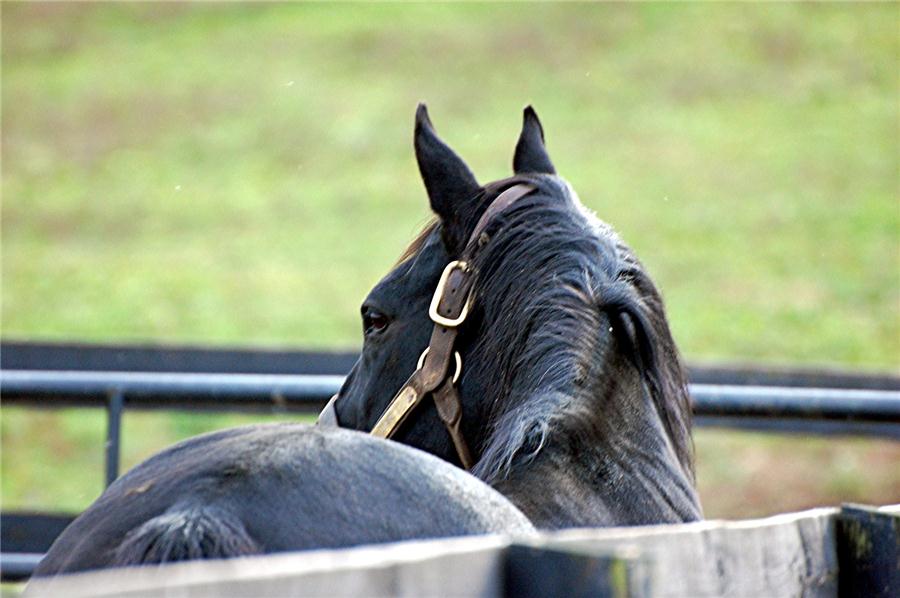 Photo Caption: You and I by Rick Capone
History:

You And I ran his first race in 1993 at Belmont and won, beating future Kentucky Derby winner Go For Gin. He went straight on to a graded stakes win in the Cowdin (G2) at Aqueduct. Ridden by Craig Perret as a two-year-old, he raced in the colors of Triumviri Stable, trained by Stanley Hough. As a three year old, You And I came close to a win in the Hutcheson Stakes in a three-horse battle involving Holy Bull and his future paddock neighbor at Old Friends, Patton. Sold to Edmund Gann in the spring of 1994, he entered the barn of Hall of Fame trainer Bobby Frankel. Under Chris McCarron the nearly jet black son of Kris S won the Riva Ridge Stakes (G3), and in 1995 he prevailed in the prestigious Metropolitan Handicap (G1) and Brooklyn Handicap (G2), Jorge Chavez up for both races. In all, You And I won 6 of his 16 starts, with 1 second and 2 thirds, earning $701,235. In 1996 he entered stud at Airdrie Stud in Kentucky, where he sired the five-times Grade 1 winning filly You. He subsequently stood at Blooming Hills Farm and Sue Hubbard and Associates in California, and Woodstead Farm in Washington. You And I was donated to Old Friends in 2011 by Woodstead Farm.