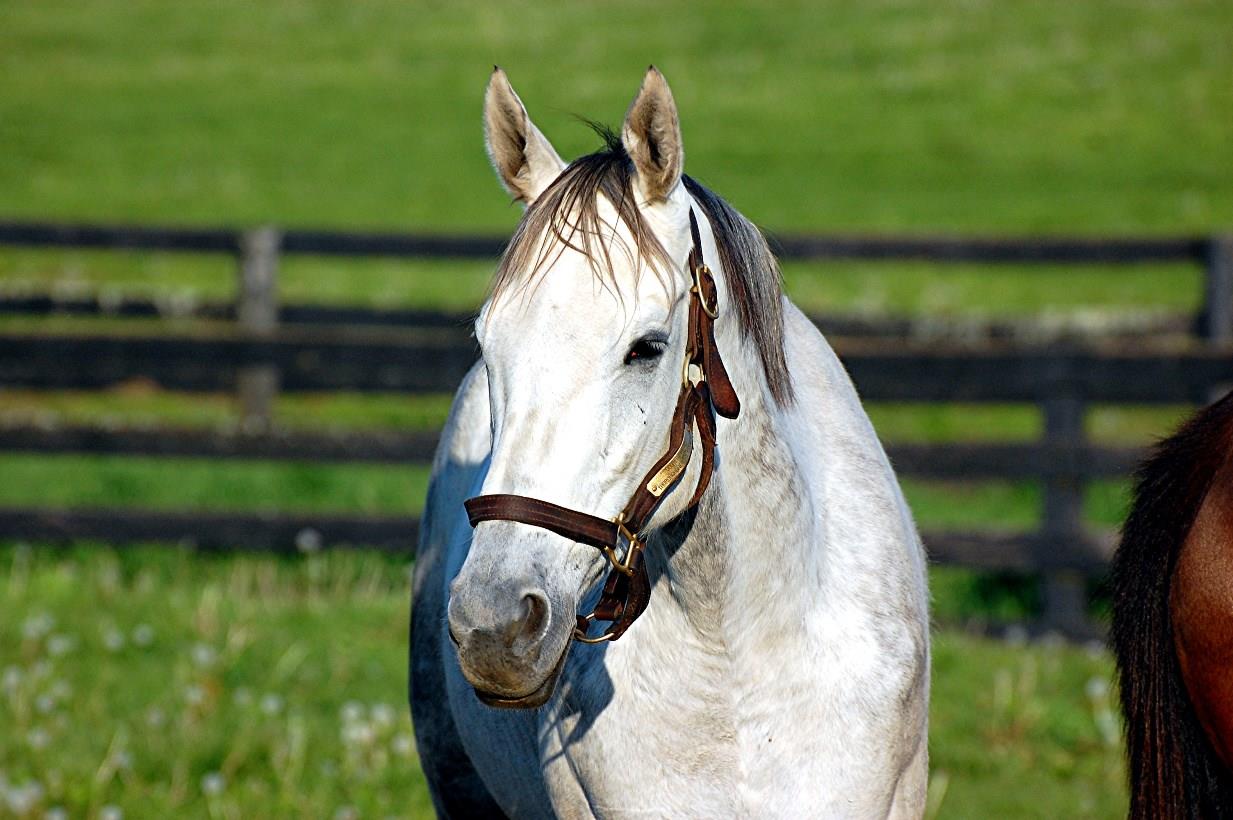 MAY 29, 2019 -Grade 3 winner Yankee Fourtune was euthanized May 28 at Old Friends, the Thoroughbred retirement farm in Georgetown, KY., due to issues of chronic arthritis. The 12-year-old gelding had been pensioned at the non-profit organization since 2015. Campaigned by New Jersey business man Harvey Clarke and trainer Kiaran McLaughlin, in 2010 the 3-year-old Yankee Fourtune (Yankee Gentleman – Madam Ann, Mi Cielo) was undefeated in five starts on turf, which included his stakes debut in the Grade 3 Hawthorne Derby and culminated with a win in the Grade 3 Commonwealth Turf at Churchill Downs.
The gray gelding raced for four additional seasons, but never quite regained his championship form, and he soon entered the claiming ranks.
In 2012 Yankee was claimed from owner Clarke for $50,000. But the gelding always had a special place in his heart. Two years later Clarke–who was also known as the breeder or co-breeder of such champions as I’ll Have Another, Stopchargingmaria, and Cairo Prince– tracked down the horse’s new owners to offer his assistance if ever needed.
Clarke soon received a call that Yankee Fourtune needing emergency colic surgery.
Clarke took care of the surgery, and donated the horse to Old Friends to secure his retirement. Clarke remained a frequent visitor to the farm and a longtime supporter until his passing in January 2019 following a long bout with lung cancer.
“Losing Harvey and Yankee Fourtune is a huge blow to everyone who knew them both,” said Michael Blowen, President and founder of Old Friends. “Harvey loved Yankee Fourtune, and inquired about him a lot. They were lucky to have each other. History:
Bred in Kentucky by Brereton C. Jones, multiple graded stakes winner Yankee Fourtune began his career racing on the dirt but found his strong suit at two turns on the turf. At three he won the Hawthorne Derby (G3) in Illinois and the Commonwealth Turf Stakes (G3) at Churchill Downs, for owners Harvey Clarke and Andrew Albstein, trained by Kiaran McLaughlin. At four, Yankee Fourtune finished third in the Canadian Turf Stakes at Florida’s Gulfstream Park. By five he was still competitive, if at a more modest level. Claimed for $50K by Michael Dubb and Bethlehem Stables and trained by Rudy Rodriguez he won at Belmont with Ramon Dominguez up. Acquired by his final racing connections, Take Two Stables and trainer Jason Servis, he won at Belmont with Jose Ortiz riding, and at the Meadowlands with Christopher De Carlo. The grey gelding went out a winner at Monmouth in 2014 with Paco Lopez in the irons, but it was clear his career was winding down. He retired with 31 starts, 9 wins, 7 seconds and 2 thirds for $391,975. Yankee Fourtune joined the retirees at Old Friends in 2015 due to the efforts and support of Harvey Clarke, for whom the gelding had achieved success in graded stakes.