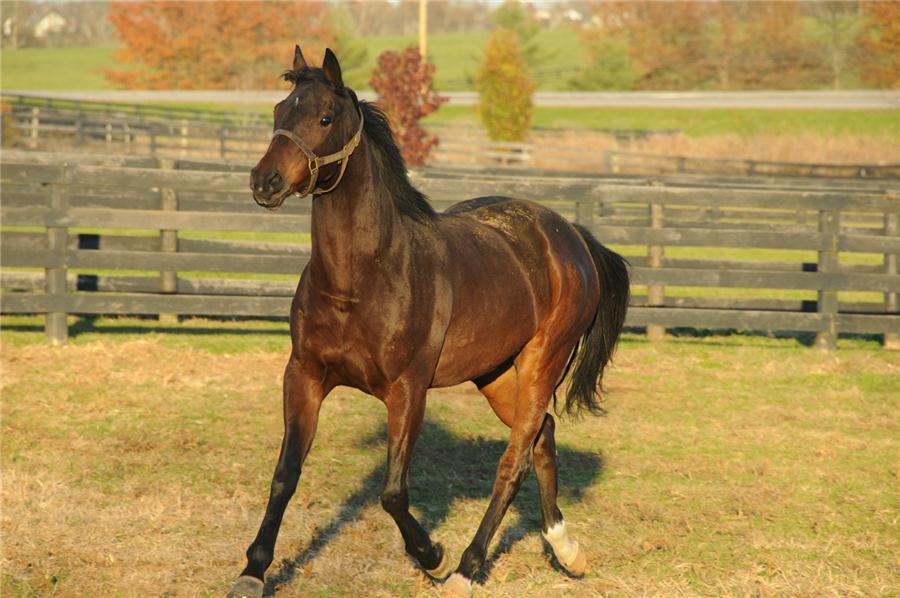 Sadly, I’m Charismatic lost his fight against chronic arthritis on June 17, 2018. The son of 1999 Kentucky Derby and Preakness winner Charismatic did not achieve the glory earned by his famous dad, but he was a warrior of the racetrack nonetheless, starting 92 times and winning 10 throughout his long career (he raced until her was 8). After falling down the claiming ranks, I’m Charismatic was luckily bought by Jason and Mary Matthews from his last racing owner in 2010, and he was promptly retired to Old Friends. Over the years the gelding lost his eyesight, but still persevered, adopting GR1 winner Arson Squad as his trusty seeing-eye companion. The two often romped and played, but in recent years the rigors of the track took their toll. We’re grateful to the Matthews for securing I’m Charismatic a dignified retirement, and we were proud to have him. He will be deeply missed by all who cared for him here at the farm. History:
I’m Charismatic, son of the 1999 Kentucky Derby and Preakness winner Charismatic, was foaled at Darby Dan Farm. His first win, second time out, came at Turfway Park in Northern Kentucky, but he did not win again for another year and a half, resulting in a drop to the lesser claiming ranks. At that level he gained success, winning at Prairie Meadows, Arlington Park, Hawthorne, Louisiana Fair Grounds, Mountaineer and Oaklawn Park over four hard-campaigning years.

But by the age of 7, he had given his best. Though no longer winning at his former level, I’m Charismatic raced on, eventually shipping to Beulah Park in Ohio, where at 8 he finally won one more race, against $2,500 company. The aging athlete could drop no further. There is no lower level. He needed to retire.

Fortunately, his courage had won the admiration Mary and Jason Matthews, who purchased him in February 2010. Old Friends extends thanks to the Matthews, and to Gary Egloff, his last racing owner, for his willing cooperation. I’m Charismatic raced a total of 92 times, with 10 wins, 15 places and 17 shows, for a total of $201,298. Though he didn’t win the Derby like his dad, he gave his all to racing, and two racing fans have stepped up to assure him the security he has earned.

Interesting Facts:
2/22/10 Retired to Old Friends Equine Retirement 2/22/10, where he will spend many years of a very well deserved retirement.