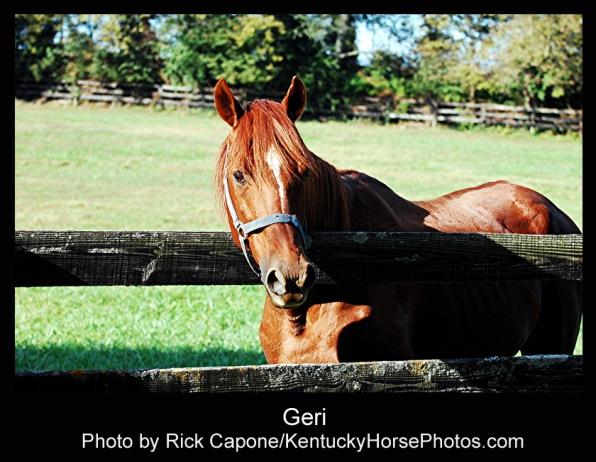 MAY 27, 2019 – Grade I winner Geri was euthanized May 25 at Park Equine Hospital in Versailles due to complications from colic. Geri had been a retiree at Old Friends, the Thoroughbred retirement farm in Georgetown, KY., since 2013. The stallion was 27. Geri was among nine stallions repatriated from overseas stud duty by the non-profit organization. He arrived back in the U.S. from Italy. Raced as a homebred by Allen E. Paulson and trained by Bill Mott, Geri (Theatrical-Garimpeiro, by Mr. Prospector) entered the spotlight with his victory in the 1996 Grade3 Creme Fraiche Handicap. The chestnut colt earned his first Grade 1 later that year in the Oaklawn Handicap. Geri went on to capture the Woodbine Mile and the Citation Handicap in 1997 before finishing his career with a total of nine wins and earnings of $1,707,980. As an international sire Geri was well represented by the multiple stakes-winning mare Bedanken, Japanese millionaire Lucky Break, and champion steeplechaser Party Airs. He was also the sire of A. P. Slew, another Old Friends retiree. “Geri’s handsome countenance offered an insufficient disguise for his deep-seated toughness,” said Old Friends founder and President Michael Blowen. “He knew who he was. He was even smart enough to tell us when his time had come. We will miss him terribly. Our thanks to Madeleine Paulson for supporting him and other great Paulson Thoroughbreds throughout the years.” History:
Multiple graded stakes winner Geri , a millionaire and international stallion, returned from overseas in August 2013 to retire at Old Friends. Raced as a homebred by Allen E. Paulson and trained by Bill Mott, Geri entered the spotlight with a victory in the 1996 Creme Fraiche Handicap (G3) at Gulfstream Park. Next time out he escalated to G1 win in the 1996 Oaklawn Handicap, with Jerry Bailey up in both. In 1997 the chestnut son of Theatrical took the Woodbine Mile under Chris Antley. Following a strong second in the Breeders’ Cup Mile (G1) at Hollywood Park he won his grand finale in the Citation Handicap (G2), for career earnings of $1,707,980. Entering stud at the Paulsons’ Brookside Farms in Kentucky, Geri also stood at Breeders’ Stallion Station in Japan, Hill ‘n’ Dale in Kentucky, and Azienda Agricola Sant’Uberto in Italy. His progeny include American multiple stakes winning mare Bedanken, Japanese millionaire Lucky Break, and graded stakes steeplechaser Party Airs. Geri joins several erstwhile rivals at Old Friends, having competed against Tinners Way, Will’s Way, and Flick, as well as Awad (1993-2010). He also joins his son A. P. Slew, a retiree since 2008. Old Friends thanks Andrea Branchini of Horse America and Peden Bloodstock in Germany for facilitating Geri’s arrival home. President and founder of Old Friends, Michael Blowen describes the team it took to bring Geri home to Old Friends. “Several years ago, Sylvia, our office manager, visited Geri in Italy and adored him,” said Blowen. “I also remembered him very fondly as a gorgeous and successful race horse. I contacted Andrea Brancini at Horse America, the international equine shipping service, and he worked on all the arrangements once Geri became available. We are delighted to have brought Geri home.”