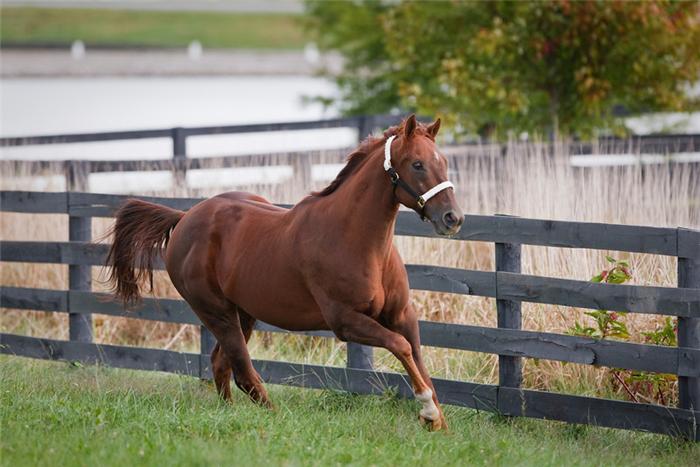 Blazing speed, then a roar of power—that was Commentator’s trademark when he won races and hearts in his tremendous five-year career. Bred in New York, the fiery red gelding was owned by Tracy and Carol Farmer and trained by Nick Zito. At three he set a stakes record in a seven length victory in the Perryville Stakes at Keeneland. At four, under Gary Stevens, he scored a rousing triumph in the 2005 Whitney (G1) at Saratoga, duking it out with Horse of the Year, Saint Liam, in one of the most memorable finishes of the year. At five, he took the Mugatea Stakes at Belmont.

He knocked off stakes races year after year, his fire burning brightly as ever. At six he won the Richmond Runner Stakes, but he saved his best for seven. Returning to another running of the Whitney (G1), Commentator broke quickly with John Velazquez up, led, and when challenged, pulled away at will, beating the year’s fastest. After polishing off the Richter Scale Sprint (G2), he won the Massachusetts Handicap under “Johnny V,” winning by 12 lengths. At eight, he waltzed to yet another victory in the Kashatreya Stakes at Belmont. “His power is difficult to put eloquently into words,” columnist Robin Bush remarked, “as he stretches for the wire and revels in his own otherworldly might.”

He earned over $2 million, set two track records and at the age of seven held the highest Beyer speed figures for distances both under and over a mile. His retirement, in September 2009, was honored at Saratoga with the first running of the Commentator Stakes. He galloped onto the track to lead the post parade, then received a peppermint Key to the City of Saratoga Springs.

“Having been around a great athlete like that is really something,” said owner Tracy Farmer. “He gave it his all every time. He deserves a good rest and a good life.” Old Friends is truly honored to be entrusted with that charge.