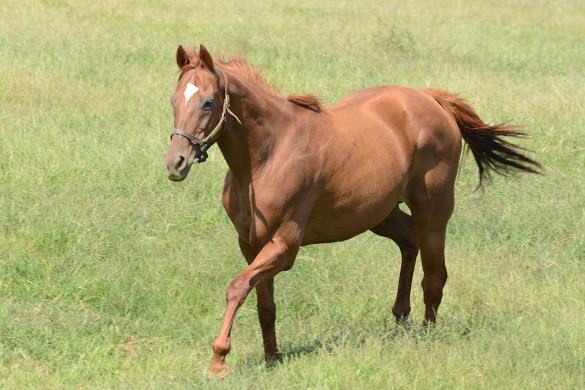 Raced by the West Point Thoroughbreds partnership, Awesome Gem was the pride and joy of shareholders Clyde and Doris Haugan as he traveled the country for six years winning stakes races. The chestnut son of Awesome Again, trained by Craig Dollase, competed in graded stakes from a mile through marathon distance. Awesome Gem’s his first graded stakes win came at four years old in the San Fernando S (G2) with Tyler Baze up. He finished second in other top West Coast stakes and ended that campaign with a third in the 2007 Breeders’ Cup Classic. At five and six he proved one of the toughest and gamest around. With David Flores in the irons he won the 2009 Hawthorne Gold Cup (G2) in which Eldaafer also competed. At seven he scored his greatest victory, the 2010 Hollywood Gold Cup (G1), defeating Rail Trip. Though outrun by Eldaafer in that year’s Breeders’ Cup Marathon, the following year he won the Lone Star Park Handicap (G3) and Longacres Mile (G3) under Robby Albarado and David Flores respectively. At nine, in heavy traffic, he was judged the winner of the Berkeley Handicap (G3), finishing “full of run.” Awesome Gem retired with 52 starts, 11 wins, 15 seconds and 7 thirds, $2,881,370 earnings, and the affectionate respect of racing fans, whose visits he now enjoys at Old Friends’ Georgetown farm.