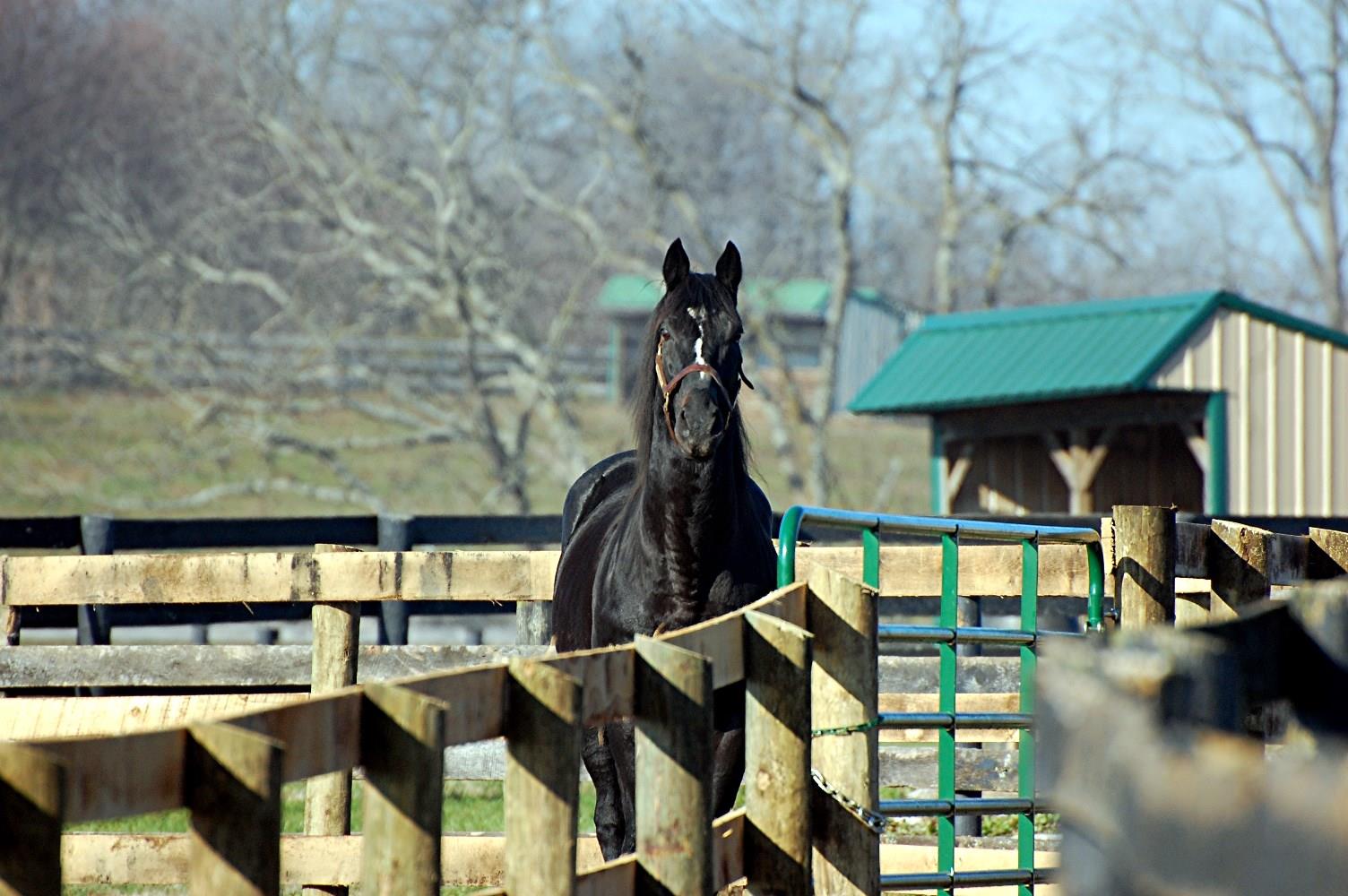 The cause of death is perceived to be a fatal paddock accident, but exact details are unknown. However, a full necropsy report is pending. He was 21.

In 2015 Old Friends re-repatriated War Emblem from the Yoshida family’s Shadai Stallion Farm in Japan. He was the second Kentucky Derby winner returned to the Bluegrass by Old Friends from overseas. Silver Charm, 1997 winner, arrived in 2014.

War Emblem (Our Emblem – Sweetest Lady, Lord at War) was bred by Charles Nuckols Jr. & Sons of Midway, KY, and originally campaigned by Russell Reineman and trainer Frank Springer. The near black stallion was sold to Prince Ahmed bin Salman’s Thoroughbred Corp. and transferred to Bob Baffert’s barn after he captured the Illinois Derby in an impressive gate-to-wire victory.

Following an equally impressive win in the Preakness, War Emblem became a serious contender to capture history’s 12th Triple Crown, but he stumbled badly at the start of the Belmont Stakes and ended up beaten by long-shot Sarava, who is also a retiree at Old Friends.

War Emblem went on to capture the Haskell Invitational for a third Grade 1 win that year and retired with 13 starts, 7 wins, and earnings of $3,491,000.

In the fall of 2002, War Emblem was sold to the Yoshida family for $17 million to stand at their renowned Shadai Stallion Station in Hokkaido, which also stood the great Sunday Silence. War Emblem proved a difficult but talented stallion, having sired less than 200 foals in his career but many of them talented runners, including Japan’s champion 2-year-old filly Robe Tissage.

“We’re very grateful to Mr. Yoshida and all of the fans who helped get War Emblem to Old Friends nearly five years ago,” said Old Friends founder and President Michael Blowen. “I know we’re supposed to appreciate all of our retirees the same but he was one of the very special ones. He was tough, narcissistic, bold, and handsome. I adored him.

“I proudly count among a very meager number of accomplishments the day he allowed me to put his halter on without biting me,” Blowen added. “He trusted me. What more could I ask for? The farm will recover from his loss over time, b ut it’ll never be the same.” History:
2002 Kentucky Derby and Preakness winner War Emblem was bred in Kentucky by Charles Nuckols, Jr. & Sons. The handsome, nearly black colt was purchased for $20,000 and won his first start at Arlington Park ridden by Alfredo Juarez, Jr. for Russell L. Reineman Stable, Inc. and trainer Frank Springer. He into Derby contention with a 6 ¼ length victory in the Illinois Derby, Larry Sterling, Jr. in the irons. Purchased by The Thoroughbred Corporation, War Emblem was thereafter trained by Bob Baffert and ridden by Victor Espinoza. On Derby day 2002 the spirited colt outran the speed and put away the challengers. He scored a repeat performance in the 2002 Preakness. But a Triple Crown was not to be. War Emblem was denied the Belmont by fellow future Old Friends retiree Sarava. His final win in the prestigious Haskell Stakes (G1) resulted in earnings of $3,491,000 for 7 wins, 0 seconds and 0 thirds in 13 races. War Emblem’s entire stud career was spent at Shadai Stallion Station in Japan. He proved a shy breeder with only 118 foals in a dozen years at stud; nevertheless, his progeny include Japan’s 2012 champion juvenile filly Robe Tissage and Shuka Sho (Jpn G1) winner Black Emblem. War Emblem was retired from stud in 2015 and donated by the Yoshida family to Old Friends. Grateful thanks go to the Yoshida family, the staff of Shadai Stallion Station, Emanuel de Seroux, and the many supporters who generously enabled War Emblem’s retirement to Old Friends.

Returned from stud duty in Japan in 2015