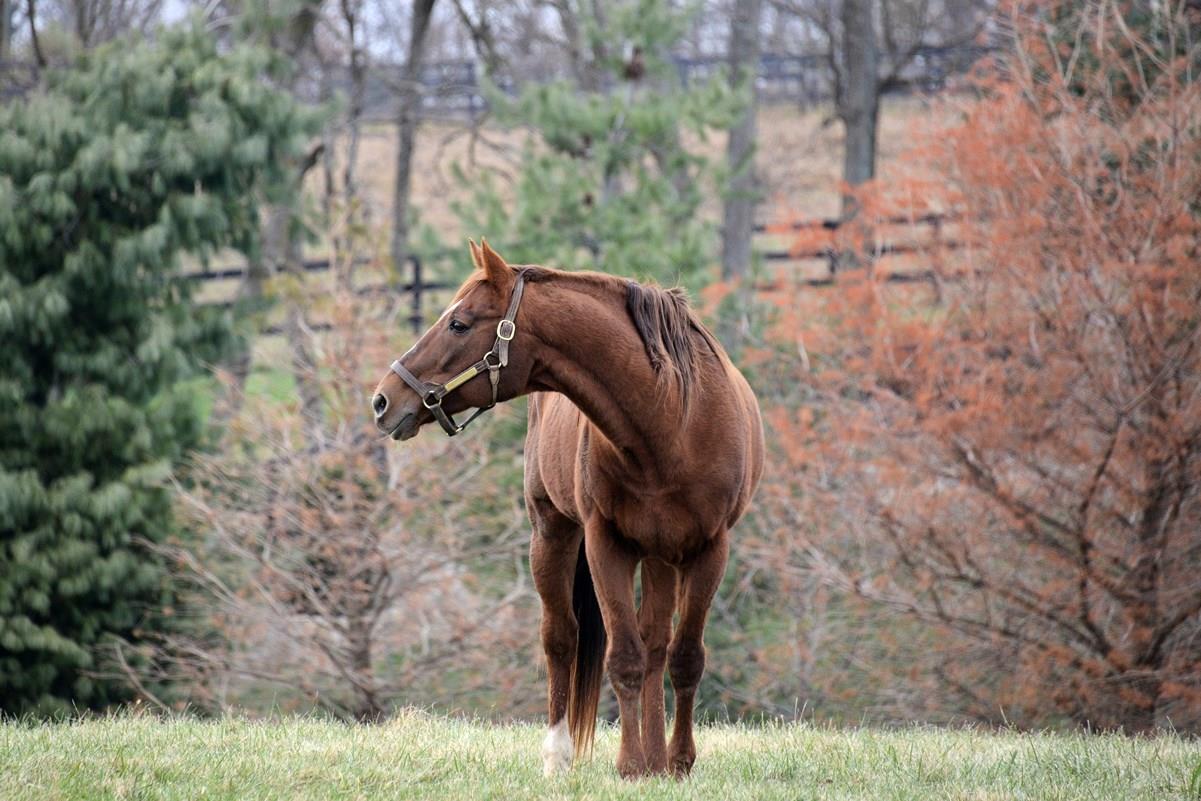 GEORGETOWN, KY – JULY 6, 2017 – Tinners Way, multiple grade-one winner and the last colt born of the great Secretariat, has died. The 27-year-old stallion was euthanized July 5th at Old Friends, the Thoroughbred Retirement Farm in Georgetown, KY., where he had been pensioned since 2010.

Michael Blowen, founder and President of Old Friends, made the announcement of his passing this morning. Old Friends resident veterinarian Dr. Bryan Waldridge attributed the cause of death to acute onset of severe neurologic disease. “Tinner had been treated in the past for EPM,” added Waldridge, “and he did have some lingering neurologic effects from a previous infection.”

Bred and owned by Juddmonte Farms, Tinners Way (Secretariat – Devon Diva, The Minstrel) began his career in Europe, where he won three of his seven starts in England and France, including the City of York Stakes and the Milcars Temple Fortune Stakes on the turf as a 3-year-old.

In the U.S. as a 4-year-old, Tinner joined California-based trainer Bobby Frankel’s barn, and under the Hall of Famer’s watchful eye the striking chestnut won the grade one $1 million Pacific Classic in 1995, beating future Hall-of-Famer Best Pal and posting a record-equaling mile and a quarter of 1:59 2/5 , a time reminiscent of his sire’s Kentucky Derby run.

Tinners Way had a repeat victory in the ’95 Pacific Classic, where he defeated 1994’s Breeders’ Cup Classic champion Concern, and he earned yet another grade-one win the following year in The Californian.

Throughout his career Tinner’s Way faced off against numerous Old Friends pensioners, including Awad, Kiri’s Clown, and Alphabet Soup.

Sent to stud in 1997 after 27 starts, seven wins, and career earnings of $1,849,452, Tinners Way stood at Vinery in Kentucky, Harris Farms in California, and finally at Key Ranch in Texas, where he retired in 2010 as the richest racehorse in Texas. He was donated to Old Friends by owners Phil Leckinger and Jerry Hardin.

“We are so saddened by the loss of Tinners Way,” said Old Friends’s Blowen, “but its times like these that you really see how much we can do for these old horses. Tinner, like Wallenda, was a warrior to the end, and when he told us his battle was over, we listened. He had so many friends from all over the country that visited him often,” added Blowen. “He leaves behind a great legacy and a host of adoring fans.” History:
Tinner’s Way, Secretariat’s final foal, was one of his very best. Born on May 25, 1990, this muscular golden chestnut traveled from Kentucky to England, where as a 3 year old he won the City of York S. and the Milcars Temple Fortune S. on the turf, and placed in other English and French stakes. Returned to the United States at 4 and trained by Bobby Frankel, Tinners Way captured the 1994 Pacific Classic S. (G1) with Eddie Delahoussaye up. His record-equaling mile and a quarter at 1:59 2/5 was reminiscent of his sire’s Kentucky Derby run at the same blistering fractions. At 5, Tinner repeated his Pacific Classic (G1) victory, again teamed with Frankel and Delahoussaye, and at 6 he again matched the track record in his Californian S. (G1) win. His outstanding career on both dirt and turf amassed $1,849,452. Tinners Way went to stud in 1996, concluding his breeding career at Key Ranch in Texas in 2010. In September, 2010 Tinner joined former two of his former racing rivals, Awad and Kiri’s Clown, at Old Friends in Kentucky. Old Friends applauds the generosity of Phil Leckinger, whose gift of Tinners Way allows this great athlete to meet his many fans.