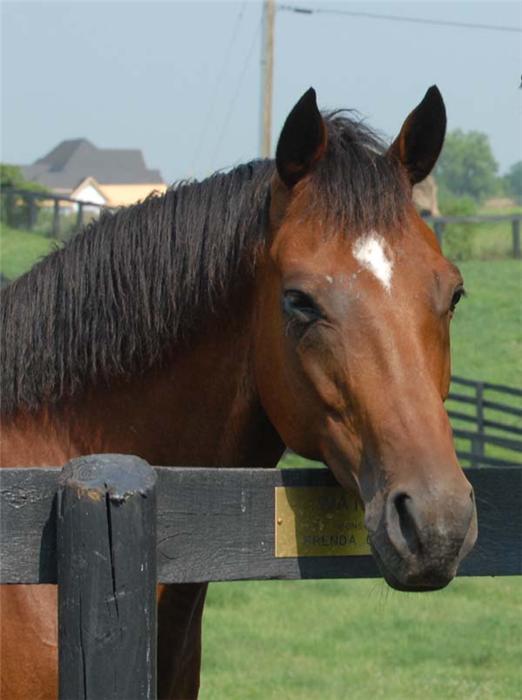 While it is the mission of Old Friends to find racehorses in need, the truth is, sometimes ex-champs just find us. For instance, Special Ring. In the summer of 2005, Ring’s owner Jack Preston – who campaigned two-time Breeders’ Cup winner Da Hoss in the 1990’s – decided to wrap up his 8-year-old gelding’s first-rate career, and donate the multiple Grade 1 stakes-winning son of Nureyev to Old Friends. Ever since, Special Ring has been our very special guest.

Like several of the Old Friends retirees, Ring began his career racing in France, where he won the Prix Saint Patrick and the Prix Altipan. But it was in the U.S that he made his mark, capturing 10 of 29 grass starts and earning over $900,000 for Prestonwood Farms. In 2002, he dusted the competition and took the Wickerr Handicap in record time. In ’03 and ’04, he had impressive back-to-back victories in the G1 Eddie Read Handicap at Del Mar (chalking up another course mark in ‘03 for 9 furlongs), and placed a game second in both the American Handicap and the Shoemaker Breeders’ Cup Mile at Hollywood Park. The handsome bay finished out the 2003 season facing the top grass horses in the world in the Breeders’ Cup Mile at Santa Anita, but finished 8th.

In 2004, Special Ring attempted a very special win for his owner when he vied again in the Breeder’s Cup Mile, this time at Lone Star Park. “It means a lot being a Texan now to win one of these races,” said long-time Houston resident Preston. “It would be a great thrill.” Unfortunately, the horse stumbled badly at the start and placed 13th.

Ring arrived at Old Friends in August of 2005 from his California home base.