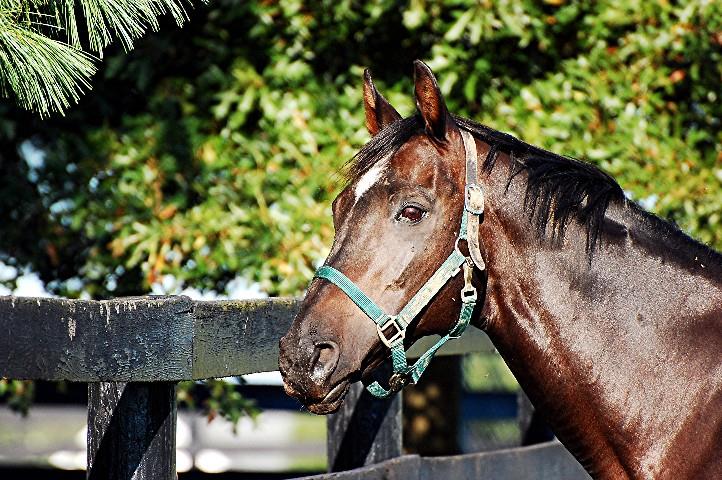 GEORGETOWN, KY – JANUARY 2, 2019 – Silver Ray, a graded-stakes winner who was rescued from potential slaughter in 2013, was euthanized yesterday due to chronic orthopedic disease at Old Friends, the Thoroughbred Retirement Center in Georgetown, KY. The stallion was 30 years old. Bred in Kentucky, Silver Ray (Silver Hawk -Danceland, by Little Current) won six of his 26 starts for owners Jerry and Ann Moss, including the GR3 Hoist the Flag Stakes at Hollywood Park. His career earnings totaled $268.532.
As a stallion Silver Ray sired 47 foals in 13 lifetime crops with 11 winners. He was eventually sold to a dressage trainer and had some success as a sire of sport horses.
But in the summer of 2013 the stallion was discovered at a livestock auction in Mira Loma, CA. by April Smith, who bought him for a mere $30. After uncovering his identity, Smith contacted Catherine Trope, founder of the Glendale, CA-based Polo Pony Rescue, and Trope helped nurse the ailing ex-racer back to health. When the Glendale News-Press ran a feature about Silver Ray’s rescue and recovery, it came to the attention of the Mosses, who are best known for campaigning the champion mare Zenyatta. Longtime supporters of Old Friends, the Mosses worked with founder and President Michael Blowen to secure Silver Ray a spot at the Georgetown, KY farm. “It has been such an honor to have Silver Ray with us these years,” said Blowen. “He has been an unbelievable fan favorite. He had an incredibly gentle soul, he was wonderful with children, and he just loved getting treats and attention from all of our visitors,” Blowen added. “Great teamwork brought this wonderful stallion to Old Friends,” said Blowen “We’re grateful to the people who rescued him and the Mosses for sponsoring his journey home.” History:
Silver Ray won the Hoist the Flag Stakes (G3) at Hollywood Park as a two year old for Jerry and Ann Moss, trained by Brian Mayberry and ridden by Martin Pedroza. As a three year old Silver Ray ran third in the El Camino Real Derby (G3) at Bay Meadows. As a mature horse he did not prove competitive in stakes, but won on the Keeneland and Santa Anita turf courses as well as continuing to earn on the dirt. He retired with 6 firsts and 3 thirds in 26 starts, and earnings of $268,532. At stud, Silver Ray sired 47 offspring including 11 winners before being sold to a dressage trainer, for whom he proved a successful sire of sport horses. In 2013, the aging stallion was discovered in at slaughter auction in California and bought for $30. The Polo Pony Rescue in Glendale helped him regain his health. When a newspaper article alerted Mr. and Mrs. Moss to Silver Ray’s narrow escape, they worked with Old Friends to give their former campaigner the permanent home and care he has earned. Share sheet info – click here. Donate to sponsor Silver Ray. Receive a certificate & 8×10 photo