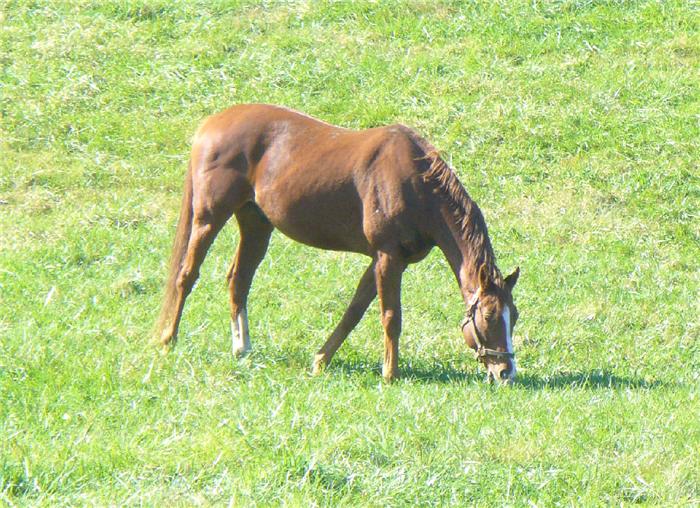 Shadow Caster was many things in his life. You can accomplish a lot in 23 horse years. You can travel from your birthplace in sunny Florida to a respected career of 47 starts at tracks from Delaware Park to Santa Anita. You can run in claiming contests, allowance races and stakes, with your best day coming under a summer sky at the Spa, capturing the Grade 2 Forego Stakes at totem shaking odds of 50 to 1. Ending his career with nearly half a million dollars in earnings, Shadow Caster was initially sent to Texas where he initially produced small crops of foals. In time, it was decided that gelding would make for a more suitable retirement. Shadow Caster took to his new life at Old Friends in stride. He stood his ground and did “himself” but as his 10 years went on, he found his herd. The chestnut among bays, he was easy to spot. Sometimes standing back quietly, sometimes in the middle of a gelding face-off, he remained his own man but learned to be one of the boys. It is a little smaller without his presence. We don’t know what horses think but I believe they are sentient and they feel. If that’s the case, I know Bobby Sands, Count the Gold, Areyoutalkingtome and Maybesomaybenot will miss their friend. I know his Old Friends family will. Keep running, Shadow. Your friend, Vivien Read Beth’s blog post obit by clicking here. History:
After breaking his maiden at Belmont at the age of 2, Shadow Caster moved up to stakes wins, including the Anthony Despirito and Faneuil Hall at Suffolk Downs, the Morven Stakes at the Meadowlands, and his crowning win, the Grade 2 Forego Stakes at Saratoga. Going to stud in 2003, he stood at Sherwood’s Farm in Texas until 2008. Shadow Caster has the same sire as fellow Old Friends retiree Futural, Future Storm by Storm Cat.