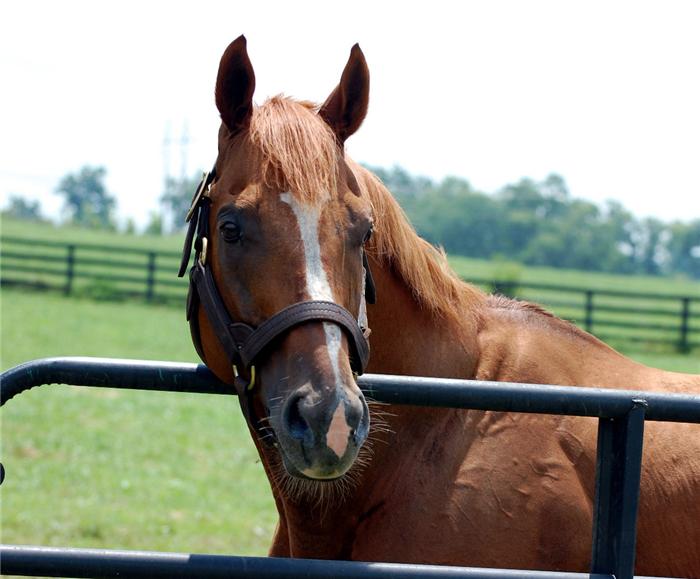 October 5, 3018. RIP Regal Sanction. We have lost this wonderful grandson of Affirmed to a sudden colic. He will be deeply missed by all who loved and cared for him. Godspeed, beautiful boy. History:
If Regal Sanction’s handsome looks remind you strongly of 1978 Triple Crown winner Affirmed, there’s a good reason. Regal Sanction is a grandson of Affirmed, and he inherited more than looks from his famed grandpa. Bred in Kentucky by Prestonwood Farm, he raced in the colors of Susan and John Moore, trained by James A. Jerkins. At two, Regal Sanction stayed on gamely as a seasoned pro in his third time out, for third place in the Pilgrim Stakes at Aqueduct. In fact, his gameness was often remarked as he hit the board in 8 of his first 10 races, one of them a graded stakes. He won the 2002 Pegasus Handicap (G2) with Jose Santos up. No mere track specialist, Regal Sanction performed admirably at the Meadowlands, Belmont, Aqueduct, Saratoga, Pimlico and Monmouth, and on turf as well as dirt. In all, from 24 starts he won 5, took 7 2nds and 3 3rds, for a total of $485,158. Retired from racing in 2004, he did stud duty at Sterlingbrook Farm, New Jersey before retiring to Old Friends in the summer of 2009, thanks to the generosity of Susan and John Moore.