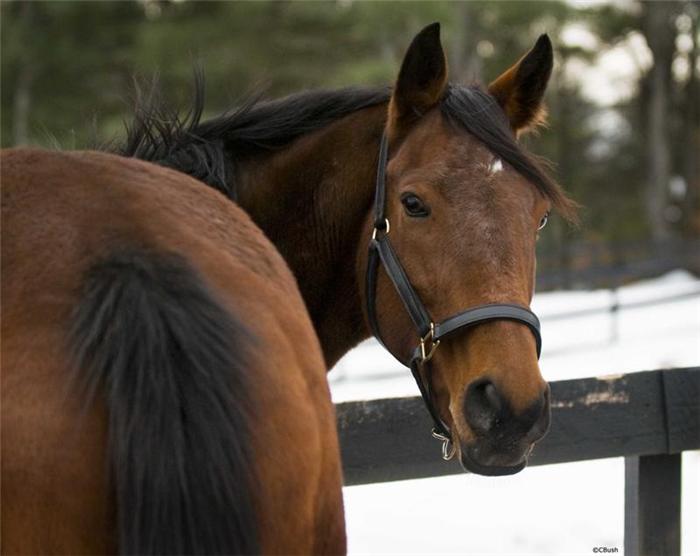 Our hearts are broken. We lost our sweet Patriot last night in a paddock accident. His full name is Karakorum Patriot and he had been with us since we started Old Friend at Cabin Creek. He was a warrior of racing, a character among horses and Cool n Collectives best friend. Things are never the same when we lose one of our beloved boys. Run free Pate. We will love you forever my friend… History: Black type-placed Karakorum Patriot, an old campaigner bred by Rainbow Stable in New York, has found a home in his home state at Old Friends’ Bobby Frankel Division. Bred in New York by Richard M. Swirn’s Rainbow Stable, Karakorum Patriot was purchased as a yearling for a bargain $6,000 by Karakorum Farms, a group of racing partnerships managed by William Discala of Staten Island. In his 7 year racing career, the gutsy son of Personal Flag would return nearly 60 times that modest figure. Trained by Linda Rice, then Jeff Odintz, he hit the board in nearly half of his 40 races for Karakorum Farms, sprinting against the likes of Commentator, Friendly Island, Silver Train and Papua, at Belmont, Saratoga and Aqueduct, and moving up to capture 2nd place in the 2005 Wine Country H at Finger Lakes. In 2006 he was claimed by Bruce Golden and Scott Lake, and again competed against Commentator in the Mugatea Stakes at Belmont. A hard-working claimer for most of his career, he showed remarkable gameness and resilience. In 2007 he took up a new home base at Finger Lakes, where he continued earning consistently. But time catches up with even the toughest athletes, and by the end of 2009, retirement was in his best interest. Joy Dunn, who had facilitated other horses’ retirement from Suffolk Downs and Finger Lakes, asked Old Friends to give him a new home. It was only fitting that he stay in New York, where he had raced with such success, so Patriot became one of the first residents of the Peppers’ Cabin Creek Farm, the Bobby Frankel Division of Old Friends. Both he and fellow retiree Midnight Secret settled in happily, “rolling around in dirt like puppies,” reported Joann Pepper. “I don’t think they’ve ever been in the dirt, just free, like this.” —Freedom well-earned! Share sheet info – click here. Donate to sponsor Karakorum Patriot. Receive a certificate and 8×10 photo