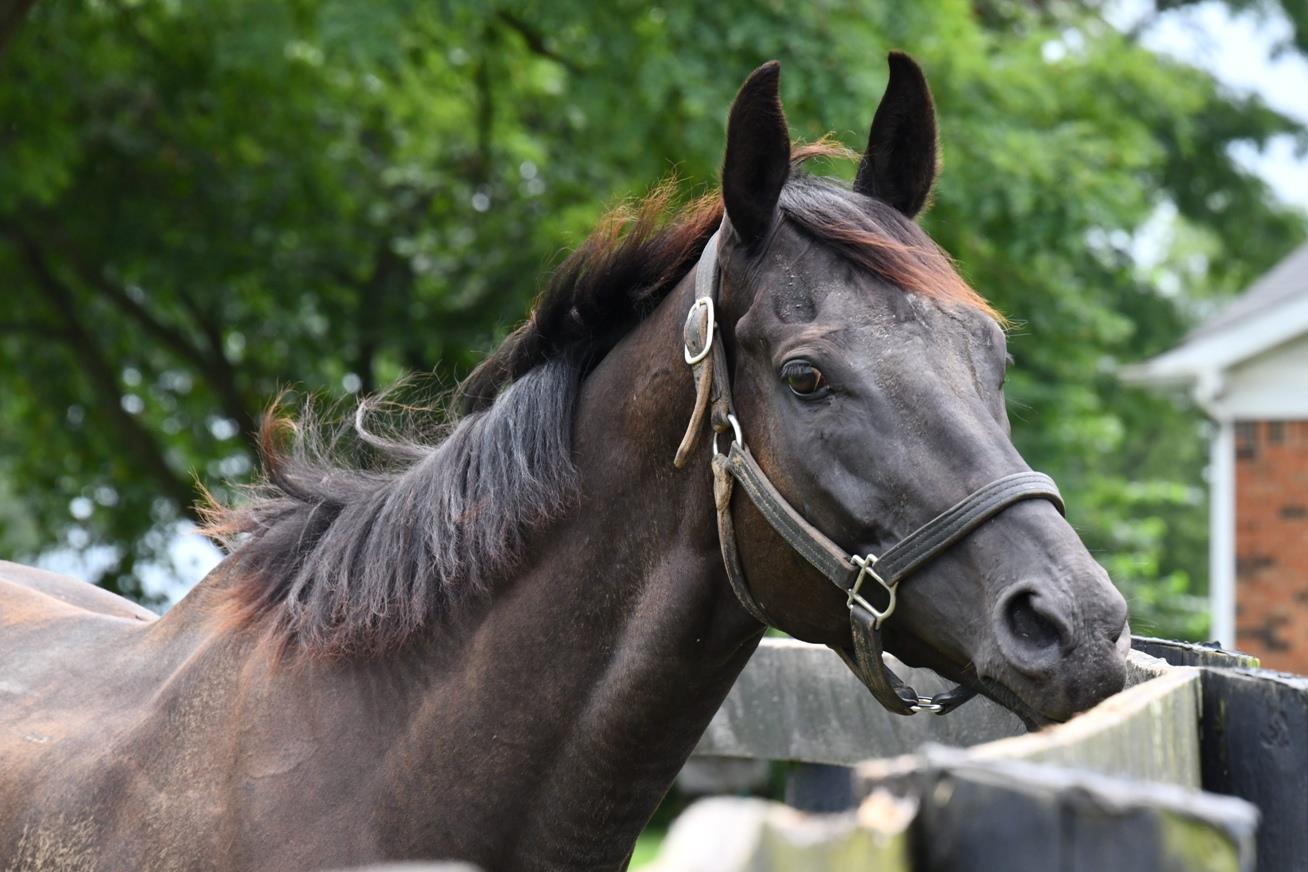 AUG. 9, 2021- Multiple graded stakes winner Hogy was euthanized this morning at Old Friends, the Thoroughbred Retirement Farm in Georgetown, KY, where he has been pensioned since 2019. The 12-year-old gelded son of Offlee Wild suffered a catastrophic fracture of the left hind ankle in a paddock accident and was attended to by Dr. Ashton Broman of Rood and Riddle Equine Hospital. Michael Blowen, founder and president of Old Friends, made the announcement today. Bred by Dr. John E. Little in Kentucky, Hogy finished his seven-year career with 55 starts and 19 wins and earnings of $1,339,782. The near-black gelding launched his career at Arlington Park in 2011 capturing his first three starts, including the Brian Barenscheer Juvenile Stakes at Canterbury Park. He earned his first graded stakes in the 2013 in the grade 3 Hanshin Cup Stakes, again at Arlington. In 2017 he set a track record for 5½ furlongs in the Colonel Power Stakes at Fair Grounds, while defeating Old Friends retiree and that day’s 4-5 favorite, Green Mask. Claimed from owner William Stiritz and trainer Scott Becker for $80,000 in 2017 following three straight losses, Hogy quickly earned his keep for new owner Michael Hui and trainer Mike Maker when he took the grade 3 Kentucky Turf Sprint Stakes at Kentucky Downs, defeating group 1 winner Undrafted in the process. After a defeat in the grade 1 Breeders’ Cup Turf Sprint, Hogy went on the following year to capture the grade Canadian Turf Stakes at Gulfstream. “Hogy had become one of the most beloved retirees on the farm and will be deeply missed,” said Old Friends’s Blowen. “He shared a paddock and became a good friend to Soi Phet, whose career mirrored Hogy’s on the West Coast. They were an amazing pair,” Blowen added. “We’re very thankful to Michael Hui for allowing us to care for his warrior of the turf these last two years.”
History: Hogy won a million dollars in a long and admirable race career. His first stakes win came at age two in the 2011 Brian Barencheer Juvenile S at Canterbury Park. At three he won the 2012 Hansel S at Turfway. His wins at four include the 2013 Hanshin Cup (G3) at Arlington, Troy S at Saratoga, and Presque Isle S. At six and seven he remained a strong stakes contender and at eight scored two more stakes wins, the 2017 Colonel Power S at Louisiana Fairgrounds and the Kentucky Downs Turf Sprint (G3), as well as placing second in the prestigious Woodford S (G2) at Keeneland. A true “grand old gelding,” he won the 1018 Frontier Utilities Turf Sprint at Sam Houston and Canadian Turf S (G3) at Gulfstream Park at the age of nine. He raced into the age of ten, earning a total of $1,339,782 in 55 starts with 19 wins, 13 seconds and 7 thirds. Bravo, Hogy! We thank his final racing owner, Michael M. Hui and trainer Michael J. Maker, for enabling Hogy’s retirement with us.