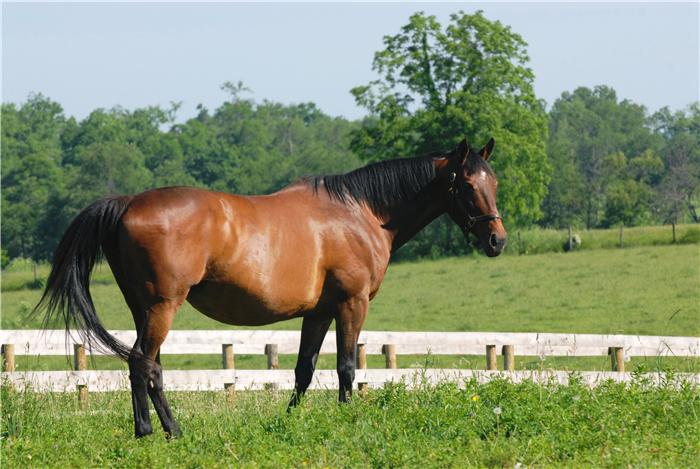 SEPTEMBER 29, 2016 – Eclipse Champion and multiple grade-one winner Hidden Lake has died. The 23-year-old daughter of Quiet American was euthanized this morning at Old Friends, the Thoroughbred Retirement Farm in Georgetown, KY, where she had been pensioned since 2009.

Michael Blowen, founder and President of Old Friends, made the announcement of her passing this afternoon and attributed her death to infirmities of old age.

Owned and campaigned by Robert N. Clay and Tracy Farmer for three seasons, Hidden Lake (Quiet American – Friendly Circle, Round Table) broke her maiden at Del Mar as a 2-year-old and was stakes placed throughout her 3-year-old year.

But it was during her 4-year-old season, after moving to the East Coast, that the mare truly made her mark. In 1997 Hidden Lake captured four graded stakes, three of them Grade 1s, including the Hempstead Handicap at Belmont and the spectacular Go for Wand at Saratoga, a formidable performance after which she nearly collapsed from heat exhaustion.

At the time her jockey, Richard Migliore, summed up her greatness of spirit: In the Go for Wand “she reached down and found something that wasn’t there. That’s what champions do.” He has called her victory one of his most memorable career wins.

Hidden Lake came back strong three months later to win The GR1 Beldame and was also a contender in that year’s Breeders’ Cup Distaff where she finished 7th. Following her banner season Hidden Lake received the Eclipse Award as Champion Older Mare and retired shortly thereafter with 22 starts, seven wins, and career earnings of $947,489.

She did become a broodmare but had increasing difficulty carrying foals to terms. In 2009 then-owner Robert S. Evans donated Hidden Lake to Old Friends.

“Hidden Lake defined bravery, determination, and courage,” said Old Friends board member Barbara Fossum, who cared for the mare regularly at the farm. “She was dignified and generous to those who loved her–demanding and all heart,” she added. “She personified everything an Eclipse Champion should be.”

“Hidden Lake was all class,” said Blowen. “especially at the end. Her courage and fortitude were unmatched while on the track and off.” History:
It was a sweltering, humid day at Saratoga. Hidden Lake, trying for her third stakes win, lost the lead with 1/16 of a mile to go. She dug down, fought back and refused to lose. Her jockey, Richard Migliore, summed up her greatness of spirit: “She reached down and found something that wasn’t there.” That’s what champions do.

Bred by Charles Nuckols, Jr. and sons, and raced by Robert Clay and Tracy Farmer, in 1997 she reeled off 4 graded stakes victories in a row, the Shuvee (G2), the Hempstead (G1), the Go For Wand (G1) and the Beldame (G1), resulting in earnings of $947,459 and the 1997 Eclipse Award for Older Female Champion. She was a true New York girl. Her West Coast trainer, Walter Greenman, felt that the California tracks were stinging her feet and that she would do better on the East Coast, so she was sent to trainer John Kimmel. That’s when she really came into her own.

After racing, she spent several years as a broodmare, but after increasing difficulty carrying foals to term, she was donated to Old Friends by owner Robert S. Evans. Thanks to his generosity, the regal Hidden Lake now holds audiences for her many adoring fans.