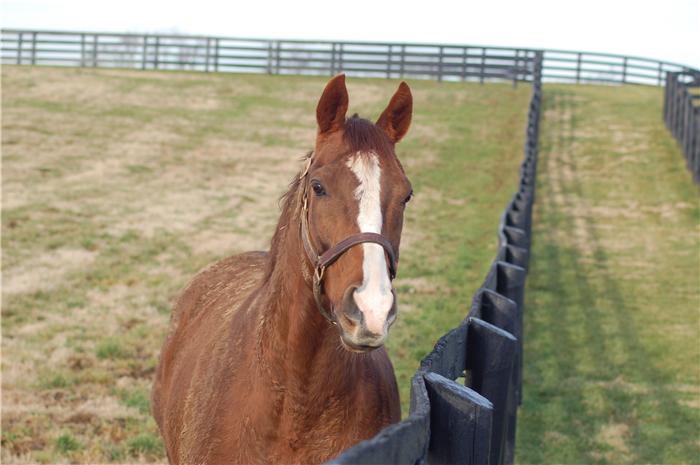 Futural had been pensioned at Old Friends, the Thoroughbred Retirement Farm in Georgetown, KY, since 2006. Michael Blowen, founder and President of Old Friends, made the announcement of his passing this morning.

In 2002 Futural captured his first Grade 1 win in the Hollywood Gold Cup, but he was controversially disqualified for interference and placed third.

His other victories included the Tokyo City Cup Handicap and the Sir Winston Churchill Handicap at the age of seven.

Racing to the age of 10, Futural won 12 of his 70 Starts for career earnings of $816,107.
His retirement to Old Friends was prompted in 2006 by renowned equine photographer Katey Barrett. After photographing the handsome chestnut during his banner year in Southern California in 2001, she fell in love with him. “When I photograph these horses, I often get connected to them,” she said at the time.

Futural had been running at Hastings in Vancouver, British Columbia when Barrett contacted then owners Donald Muldoon and trainer Dave Milburn and asked if she could find him a home when he was finished racing.

“Futural was a very generous horse and very kind,” said Hall of Fame Jockey Chris McCarron, who rode Futural in seven of his career starts. “He got me across the wire in the one and only time I ever won the Hollywood Gold Cup, and he’ll always have a special place in my heart.”
“It was an honor having Futural with us all these years,” said Blowen. “We are grateful to Katey for helping us retire him and to his connections for their support.

“Futural has been a great friend to us and to his fellow geldings, most recently Yankee Fourtune,” added Blowen. “All he ever asked for in return was a nice banana, his favorite treat. We’ll certainly miss him.” History:
This handsome grandson of the spectacular sire Storm Cat won multiple graded stakes races, including the 2001 San Bernadino Handicap (G2) and Mervyn Leroy Handicap (G2).

He finished first in the 2001 Hollywood Gold Cup and would have given Hall of Fame jockey Chris McCarron a win in that G1 stakes, only to be disqualified to third. Futural’s class shines out in his muscular good looks and gentlemanly demeanor, which have quickly made him a big favorite at Old Friends. He’s always kindly and ready for attention, conversation, and a freshly peeled banana.

Interesting Facts:
Competed against Easy Grades at Santa Anita 2003. Raced through the age of 10