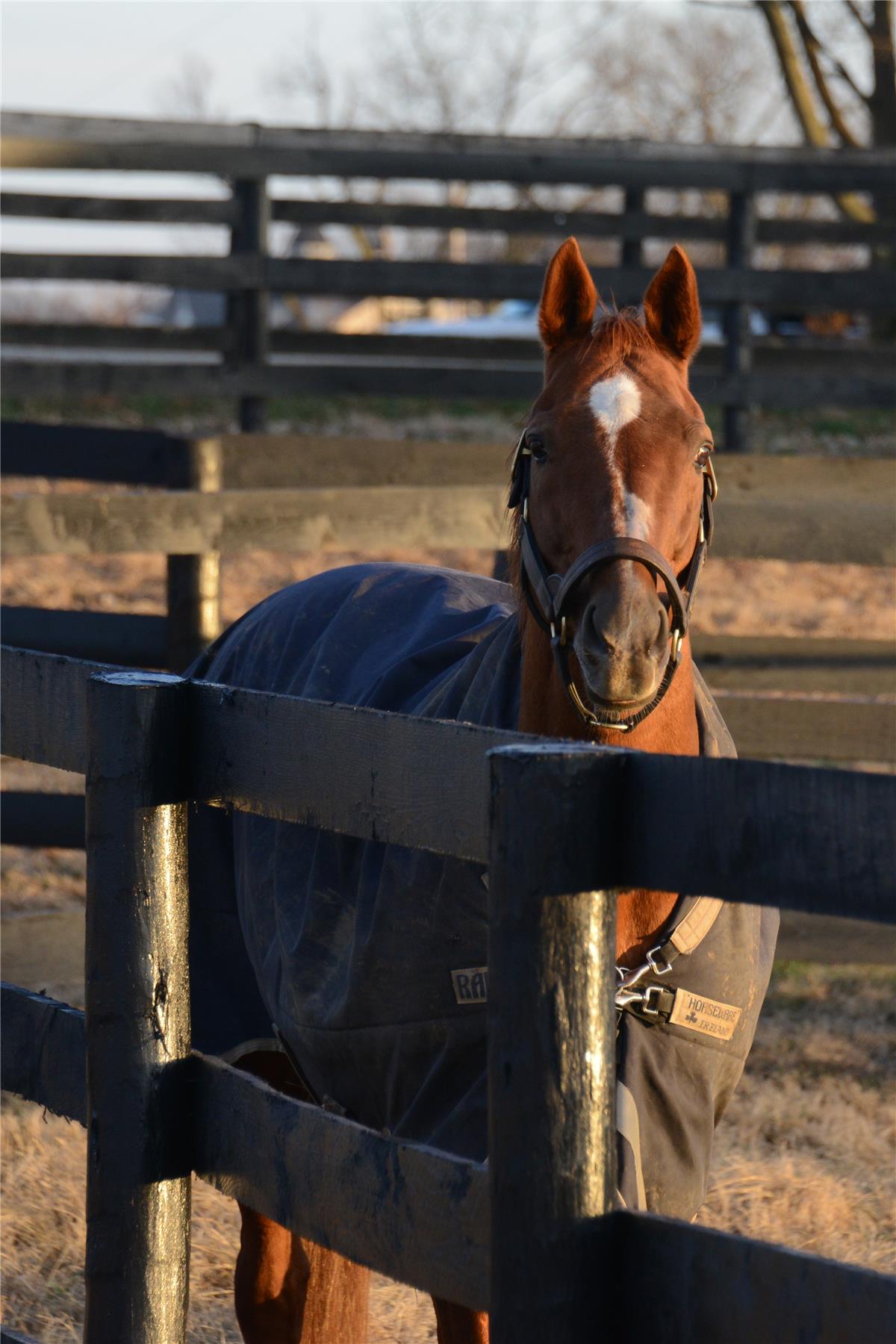 FEBRUARY 19, 2017- Dual classic winner and 1999 Horse of the Year Charismatic has died.  The 20-year-old stallion, who returned to the United States from the JBBA Shizunai Stallion Station in Japan on December 4, 2016, was pensioned at Old Friends, the Thoroughbred Retirement Center in Georgetown, KY.

The announcement of his sudden passing was made this afternoon by Old Friends president Michael Blowen.   The stallion was discovered early this morning. Attending veterinarian Dr. Bryan Waldridge was immediately called to the scene, but the cause of death is unknown. The results of a full necropsy are pending.   “Right now, everyone is pretty much inconsolable,” said Blowen. “Last night, at 6:30, he was fine. He was a really tough horse and he deserved a much longer retirement. But none of us, unfortunately, has a magic wand. Everyone at Old Friends takes solace from the few great months that this great Champion gave us.”

Bred by Kentucky by Parrish Hill Farm and William Farish, and trained by Hall of Famer D. Wayne Lukas, Charismatic (Summer Squall-Bali Babe, by Drone) won, at long odds, the 1999 Kentucky Derby after vying in claiming races just a few months earlier. He went on to capture the Preakness Stakes and found himself an unlikely Triple Crown contender.

But in the Belmont Stakes the chestnut colt suffered multiple fractures in his left front leg just a few strides before the wire. It was only through the heroic efforts of jockey Chris Antley–who quickly dismounted and held up Charismatic’s injured left front leg off the ground–that the injuries were career ending and not life ending.

Charismatic earned that year’s Eclipse Award as champion 3-year-old colt, as well as Horse of the Year honors, and retired with five wins from 17 starts and earnings of $2,038,064. He entered stud at Lane’s End in 2000 and stood there for three seasons before relocating to Japan in 2002.

More information will be released as it becomes available.

Charismatic, 1999 dual classic winner and Horse of the Year, died suddenly at Old Friends Thoroughbred Retirement in Georgetown, KY., on February 19, 2017.
“A necropsy performed at the University of Kentucky Veterinary Diagnostic Laboratory revealed that Charismatic suffered a severe catastrophic fracture of his pelvis that resulted in fatal bleeding. Pelvic fractures will in some cases also lacerate the large arteries of the pelvis and cause severe internal bleeding. Fatal pelvic fractures are uncommon and usually unforeseeable. It is not possible to know exactly how the injury happened or any factors that may have led to its occurrence.”
–Bryan M. Waldridge, DVM, MS
Diplomate, American Board of Veterinary Practitioners (Equine Practice)
Diplomate, American College of Veterinary Internal Medicine (Large Animal)
–Rhodes P. Bell, DVM, MS
Diplomate, American College of Veterinary Surgeons (Large Animal)
Staff members and volunteers at Old Friends are extremely grateful for the heartfelt condolences and kind words we have received.  Charismatic’s beauty and gentle spirit will remain in our hearts forever.

We can reel off the stats:  Winner of the Kentucky Derby, winner of the Preakness Stakes, dual Eclipse-Awards, including Horse of the Year, earnings of over $2 million. But maybe what fans remember most about the fairy-tale career of Charismatic, is that he lost.  In spring of 1999 Charismatic rose to the top of the three-year old ranks from the misty depths of average horses by winning the GR2 Coolmore Lexington Stakes. Coming down the stretch at Keeneland, ridden by jockey Chris Antley, who himself was rising from the ashes of his own drug and alcohol demons, Charismatic was a cinnamon matchstick suddenly on fire, he was Sleeping Beauty awaking from the long slumber. After winning the Kentucky Derby and then the Preakness Stakes, the unlikely Charismatic found himself on the threshold of being the 12th Triple Crown champion.  But in the Belmont Stakes, he crossed the finish line in third place, pulled up with multiple fractures in his left front leg. It was an ending worthy of the Brothers Grimm–until Antley jumped off and held the colt’s leg off the ground until help arrived, a fractured man tending the wounds of his splintered partner. And in that moment we knew that all was not lost at all. As turf writer Jay Hovedy noted in Daily Racing Form at the time, “The Triple Crown was lost, but Charismatic was saved.”  Indeed. Charismatic is the third Kentucky Derby winner Old Friends has re-patriated from Japan—along with Silver Charm (1997’s winner) and War Emblem (2002)–and we’re looking forward to living happily ever after with him.

When Charismatic started in the 1999 Lexington Stakes (G2), few at Keeneland imagined a colt whose only wins were in two claiming races had a chance. He and Jerry Bailey surprised the crowd with a strong outside move that left the rest behind. When trainer D. Wayne Lukas brought the big chestnut colt to Louisville, even fewer figured him for a Kentucky Derby winner. He went off at odds of 31.30. Riding him for the first time, Chris Antley kept clear of the jostling pack, and when asked in midstretch, Charismatic answered with his powerful outside run, giving owners Bob and Beverly Lewis their second Derby in three years, following Silver Charm’s in 1997. Even so, Charismatic wasn’t favored in the Preakness. But again he gave Antley what had become his signature move, a confident, commanding run from outside the mid- pack, proving beyond doubt that he was the best three year old in America. Now the colt who’d twice been offered for a claiming tag and the jockey who’d battled drugs and weight captured people’s love for underdogs who beat the odds. But the try for the Triple Crown finished in a career-ending injury. Antley’s quick action, and the care provided by the Lewis family, enabled Charismatic to heal. In his 17 starts Charismatic achieved 5 wins, 2 seconds, 4 thirds for $2,038,064. At Lane’s End Farm he sired Sun King before moving to JBBA’s Shizunai Stallion Station in Japan. Charismatic retired from stud at age 20 and arrived at Old Friends in December 2016. Old Friends thanks the Robert and Beverly Lewis Family Foundation, Tito’s Handmade Vodka, and Charismatic’s Inner Circle for funding Charismatic’s return to Kentucky.

3rd in Belmont S. with a fractured leg