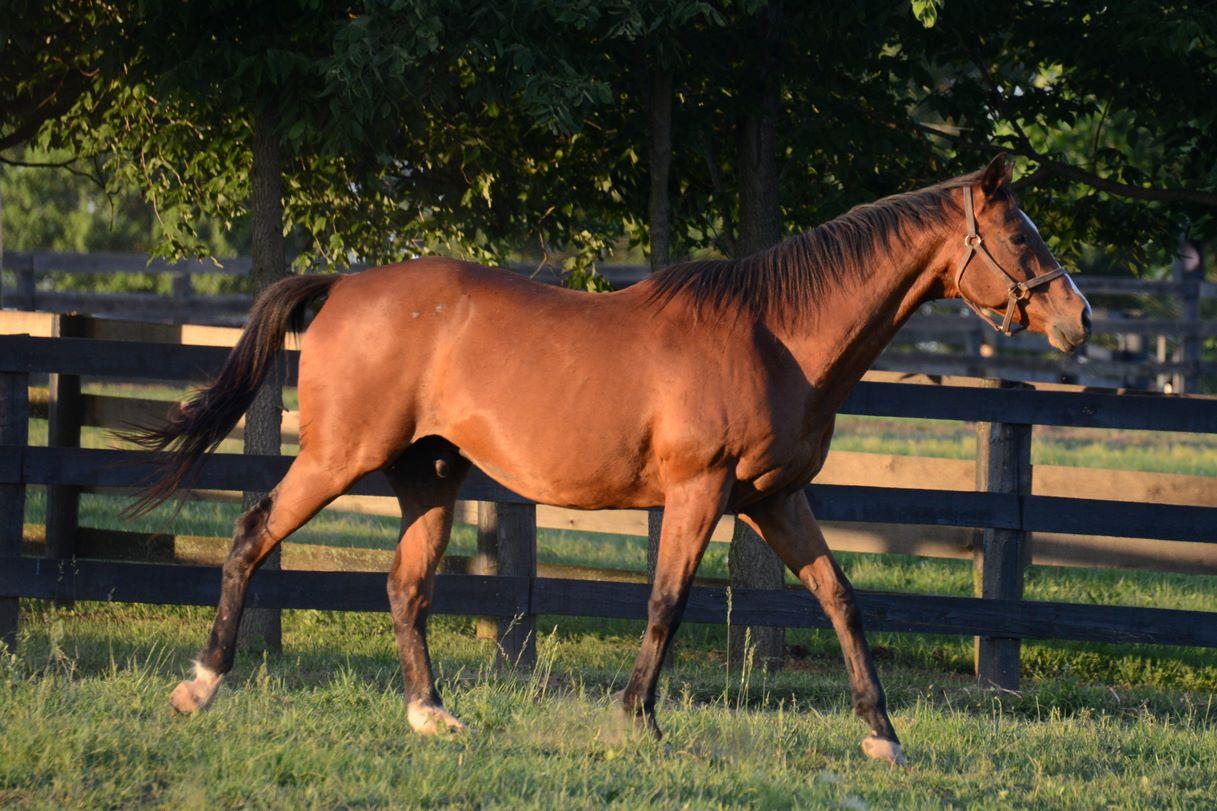 GEORGETOWN, KY – JULY 7, 2017 – Bonapaw, the Grade 1- winning sprinter, was euthanized July 7 at Old Friends, the Thoroughbred Retirement Farm in Georgetown, KY., due to complications caused by the neurological disease EPM. He was 21.

Bonapaw (Sabona – Pawlova, Nijinsky II) was nothing short of a Cinderella horse for his owners, Louisiana-based twin brothers James and Dennis Richard, who purchased the bay gelding as a yearling for $6.500. Bonapaw went on to take his owners far and wide, capturing 18 of 49 starts and earning over $1.1 million.

The horse broke his maiden as a two-year old at Fair Grounds, and over the years, became the pride of the track winning five stakes over the oval.

Bonapaw got stronger with age. His first graded stakes came in 2001 at Oaklawn Park when he won the Grade 3 Count Fleet Sprint Handicap. In 2002, at the age of six, he journeyed to the United Arab Emirates for a chance at the Group 1 Dubai Golden Shaheen (he placed 6 th) then captured the Grade 3 Hanshin Cup Handicap at Arlington, and his first Grade 1 victory, the Vosburgh Stakes, at Belmont Park.

His Vosburg win encouraged the Richard brothers to invest $90,000 supplemental fee to enter Bonapaw in the Breeders’ Cup Sprint at Arlington, but he finished 10 th in a field that included Kona Gold, Xtra Heat, and winner Orientate.

“We are so grateful to have had these years with Bonapaw,” said Old Friends president Michael Blowen. “He was a great race horse, and he meant so much to his owners as well as all of his many fans. Jamie even donated Bonapaw’s Vosburgh Trophy to us, and we will cherish it always.”

Bred by Dr. William O. Reed in Kentucky, Bonapaw raced for twins Dennis and James Richards of New Orleans. Learning his trade on the Louisiana circuit, the bay colt did well. Then, something clicked. Not yet 3 (he was an April foal), he began showing serious speed.

His first stakes victory, for trainer Donald Hecker, came in the 6 furlong Inaugural H at Evangeline Downs. Maturing under trainer Howard Alonzo, Bonapaw won the Island Whirl H at Louisiana Downs. Trained by Norman C. Miller III, he won the 2000 Thanksgiving H, 6 f in a stakes record 1:09 flat. At 5, after a Pelleteri Breeders’ Cup win, Bonapaw hit the road for the big time. He captured the Count Fleet Sprint (G3) at Churchill Downs and the Iowa Sprint, then swooped home to break his own record in the 2001 Thanksgiving H at 1:083.

He was even faster at 6. Under regular jockey Gerard Melancon, the Louisiana star won the Colonel Power S, and set another stakes record in a sprint named for a much-loved Old Friends former resident, The Taylor’s Special. In the Hanshin (G3), Bonapaw beat future Old Friends resident Discreet Hero, then won the Vosburgh (G1) over Aldebaran. By now, the Cajun star and his connections were international news. Heading for the 2002 Breeders’ Cup Sprint, trainer Norman Miller gave Bonapaw hia daily hour-long massage. Bonapaw was pinched back at the start of the BC Sprint and never found his best run. He waged a rigorous seven year old campaign, then raced lightly until he retirement due to breathing issues. “We had a good run,” owner Dennis Richard said—and that’s an understatement. In February 2009, son and nephew of the Richards twins, James Richards, Jr., generously donated Bonapaw to Old Friends. An Old Friends wine edition by Crisman Mill commemorated his arrival. Its label sports a portrait of Bonapaw by singer Eddie Money.

Interesting Facts:
2nd to Bluesthestandard in the 2003 Texas Mile

Other Achievements:
2nd to Bluesthestandard in the 2003 Texas Mile